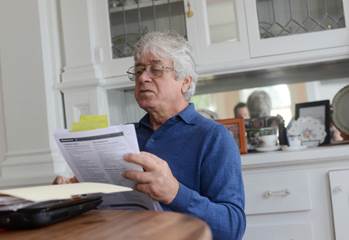 SUISUN CITY — When the cost of retiree Jerry Rothfeld’s health care plan took a sharp increase, he and his wife had to switch to another with lower costs, but also with less coverage and the requirement to travel out of town for health care.

Soon after Covered California, the state’s health care marketplace, opened, the Rothfelds decided to see if they could get better, affordable health care.

“We were nervous, to say the least,” Rothfeld said of starting the process to get coverage through Covered California.

He called the process “tricky and confusing at first,” but assistance from the Solano Coalition for Better Health not only managed to connect him with an affordable health care plan, but one that included access to the doctor he had before he had to quit his first plan.

For Joseph Rapolla of Fairfield, getting his health care coverage squared away before the March 31 deadline is also going to make his life a lot easier. It will certainly make dealing with his diabetes a lot better and more affordable.

“I could not wait any longer,” Rapolla said. “Now, this makes things a lot easier.”

Once the open enrollment deadline passes, the next chance to register will be from Oct. 15 to Dec. 7 for coverage starting Jan. 1, 2015.

For Jack Chester of Fairfield, who is on disability, it means the medications and possible treatment he needs won’t “cost into the thousands.”

“Everyone should have health insurance,” Chester said. “It is not cheap, but if you look at the cost of health care, it’s needed.”

Both also were able to work through all the intricacies of getting health care coverage through Covered California in less than a half-hour with the face-to-face help of Kiersha Baron, a health access specialist with the Solano Coalition for Better Health.

The clock is counting down toward the deadline for getting health care coverage through the state’s network and the Solano County nonprofit is pushing hard to get as many uninsured people as possible connected.

“Now is the time to explore what your options are,” said Tamera Owens, the nonprofit’s director of operations. “We want people to understand that they should explore their options before March 31. We want to be able to sit down with them and get them the coverage they need, and that door is closing.”

Locally, the 26-year-old Solano Coalition for Better Health, whose offices are located in Suisun City, has been working with Covered California since July to help local residents get health care coverage.

The coalition is an alliance local hospitals, nonprofits, community medical groups and schools that work to improve health care in Solano County. Its counselors are offering their services for free to connect people with health care.

Initial reactions to the coalition’s efforts have ranged from elation that the Affordable Care Act has started to those saying they don’t want any part of “Obamacare.”

Questions fielded by coalition counselors center primarily on whether the health care plan options are expensive and how much will they cost, Owens said.

“The largest misconception is the cost,” she said. “Depending on your income, you may be able to qualify for a fee waiver.”

Counselors are working with people to help them better understand Covered California’s benefits and find the best plan to meet their needs, whether its enrollment in Covered California, Medi-Cal or the Solano Kids Insurance Program.

The coalition’s efforts to get the word out have included town hall meetings, presentations before employee groups and small businesses, and work with school districts. So far, more than 3,500 Solano County adults and children have been enrolled through the coalition’s efforts. The coalition connects between 300 and 325 people on average a month with health care plans.

“It has been steady, but it has been a growing number,” Owens said. “A lot has been by word of mouth from those who get health care coverage and talk to their friends and neighbors.”

The best advice that Rothfeld can give others seeking health care coverage “is to just be persistent and don’t get discouraged.”

To reach the Solano Coalition for Better Health, call 863-4444 or go to www.solanocoalition.org. The coalition’s main offices are located at One Harbor Center, Suite 270, in Suisun City. It is open 8 a.m. to 5 p.m. weekdays.